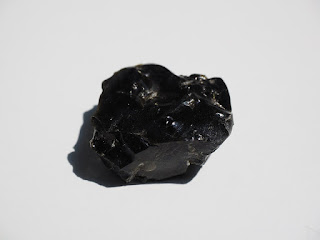 The Stone wants to return home.  It wants to take its rightful place in those black halls, from where it was once torn.  It wills movement, ever Westwards.  It is not unreasonable, if something can be gained by taking a step back that is fine, as long as it is followed by two steps forwards.

The Stone wills you to move it.  Your first mistake was when you touched it.  Your fate became bound to it’s will.  You became it’s thrall.

The Stone has many servants.  They linger inside it’s impossible black halls, waiting for their turn to carry it westwards.

The purpose of the black capstone is to allow for players to easily join, quit the game, or miss sessions.  Essentially, the stone is the in-universe excuse we will use when a player isn’t present or somebody new joins.  It also acts as an overall goal for the campaign, a reason why everybody wants to reach the black city.  I don’t intend to mechanically enforce this, it’s more of a narrative thread.

In terms of gameplay, the stone takes up 1 sack of cargo and can not be abandoned. In my game, the stone gives each player 150xp when they reach a new major location substantially farther west than any previous one.

The stone does not always work, people who touch it get a save and it only can attempt to enthrall once per day.  You have never seen the stone take damage, but you can not bring yourself to test it.  When you stare into it, it gives off a sense of depth, as though there is more there than just a stone.

At some point, characters become too powerful for the capstone to become too powerful for the capstone to hold and are able to break from it’s grasp.  At this point, they can continue with the party willingly (they will still be able to enter the stone) or retire, allowing their player to make a new level 1 character. In my GLOG game, this happens when they reach level 5.

Popular posts from this blog 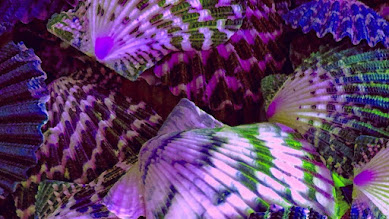 When it comes to communication more advanced than the Safranj Homing Beetle network, the premiere option of choice among the Rainbow Lands and Ultraviolet Grasslands is the pourpre clam network. The backbone (or distinct lack thereof) of the network is the pourpre clam, a species easily identified by its purple-hued shell and native to the violet lands.  Pourpre clams are not individual filter-feeding invertebrates, but are, in fact, the small parts of a larger trans-dimensional being intersecting with our reality in order to feed on small invertebrates and zooplankton.  It is this property that makes the pourpre clam so useful. Through use of careful flesh-crafting, it is possible to thread a wire through one clam and have it emerge from another.  This procedure is costly and time consuming, requiring precise use of trans-dimensional mathematics to target the emerging clam, but the end result is a messaging system with seemingly no spatial limitations.  The clams need a consistent s
Read more 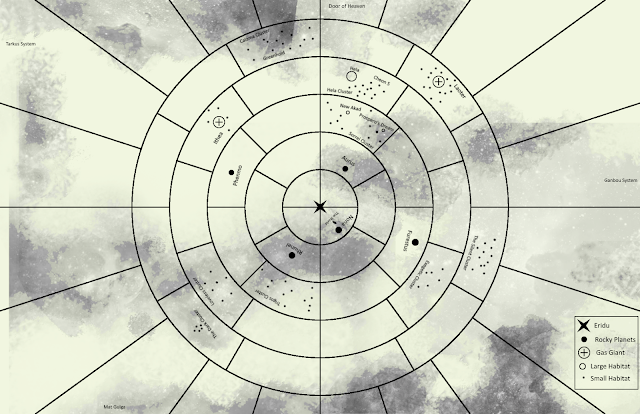 The Age of Odds is kind of my dream campaign, it is the culmination of a large number of ideas that have been floating around my head for years. I describe the setting as "Spacesuits and Sorcery."  It takes place an uncertain time in the far future, after post-human gods abandoned the rest of the universe and fled into their own domains, leaving the interstellar societies they managed to collapse in an event known as the Schism. The Eridu solar system is the focus of the campaign.  After the Schism, the High Ways, which allowed for faster than light transit, were closed to mortals.  Due to this, there is no FTL travel in the setting.  This means that I had to cram what would normally be a sector's worth of complexity into a single star system. This is my method for making a map of a single star system.  It is somewhat limited to the setting, since it assumes a solar system, where the planets have been moved or constructed in a way that produces more habitable plan
Read more